NO FLY ZONE WITH MO AMER LIVE AT THE AGRI CENTER MARCH 25th, 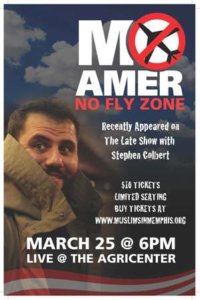 NO FLY ZONE WITH MO AMER

Mo Amer’s comedy is exactly what the world needs right now. Born to Palestinian refugees in Kuwait, Mo’s family relocated to Houston, Texas when he was just 9 years old. As a pioneer of Arab-American standup, he has already cemented his stature as a truly original voice in comedy, opening for standup legend Dave Chappelle over 100 times (including at the prestigious Just For Laughs Festival in Montreal in 2015), becoming a paid regular and club favorite at the world-famous Comedy Cellar in NYC, and developing a reality series with The Office’s Rainn Wilson, who calls Mo “the funniest comic in the whole entire world.” Weeks after the 2016 election, Mo made international headlines when a chance airline upgrade landed him in first class seated next to Eric Trump. The story of an Arab-American Muslim immigrant sitting next to the controversial POTUS’ son–at a time of heightened cultural tension in America–went super viral.

Watching Mo live is a unique experience that brings global news headlines to life; through a hilarious blend of improvisation and personal story-telling, Mo reveals his life’s curious tale, including how he managed to travel the world without a passport for two decades, was held at gunpoint by an American soldier in Iraq, and once had Bradley Cooper (unintentionally) save him from a sticky situation in the Middle East. Mo has performed in over two dozen countries on five continents––including as the first and only Arab-American refugee comic to perform for U.S. and coalition troops overseas, as well as with “Allah Made Me Funny––The Official Muslim Comedy Tour.”

Mo has appeared on television several times, starred in a handful of independent films, and has been interviewed by over 100 major world media outlets, including The New York Times, Rolling Stone, and The Guardian. Notably, he appeared on Bassem Youssef’s ‘Al-Bernameg’ (The Daily Show of Egypt) and served as co-host of Comedy Central Presents (CC Arabia). In early 2017, Mo will appear on Comedy Central’s @midnight and make his late night debut on CBS’s Late Night with Stephen Colbert. Additionally, he has an original sitcom in development (based on his standup) and plans to record his first one-hour standup special for television this year.

This site uses Akismet to reduce spam. Learn how your comment data is processed.